I’m sitting in my living room right now drinking coffee and listening to the Mormon Tabernacle Choir belt out Christmas classics. It’s November 9th. I’m supposed to wait. I’m supposed to make sure Christmas doesn’t stomp all over Thanksgiving. I should be pouting on Facebook about the fact that Santa is already firmly planted in the middle of Haywood Mall.

I’ve never subscribed to that concept. I think the two share a common spirit of togetherness, love and family.

This weekend in Boone Russ and I stumbled on a little antique store that almost wasn’t meant to be found. It was in the downstairs backside of a building, facing an alley. We passed through the alley as we guessed our way back up to the main road. I love antique stores for all the tacky junk, gaudy costume jewelry, and the records.

We will stop what we’re doing and dig through any pile of records anytime. No one else was in the store with us and the man at the register was the kind of businessman who doesn’t watch customers,  but trusts them. We sat down on a concrete floor in a back room and flipped through the stacks of albums. We laughed at some, got excited about others, and found a few that we already own. Every once in a while we’d read an album title out loud. About halfway through one box Russ casually mentioned the Mormon Tabernacle Christmas album.

Of all the music I listen to, everything from Taylor Swift (you quit judging me) to the Stones to –my all time favorite– Paul Simon, this is probably the most surprising. I don’t think either of us expected it would be the only album we bought from the man behind the counter.

I laid down three dollar bills and dug two dimes out of my wallet. The man grabbed a wrinkled grocery bag out of a cabinet and slid the record inside. He asked if I needed a receipt. I declined and we left the with just one record. 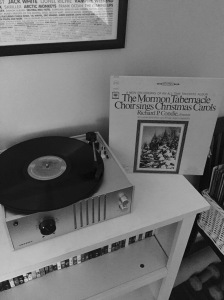 It’s not a hit record. It’s not a classic. It won’t be played on the radio whenever they start the 24-hour non-top Christmas music rotation. This album is a dozen-or-so cousins sleeping on the floor in a house in Wilmington. It’s Mamaw telling us to slow down as we scurried through the kitchen while it played on the record player. It’s my mom singing along while she rolls snowball cookies in her hand. It’s hanging the ornaments on the tree and wrapping gifts. It’s getting ready for Christmas eve church services and coming home too excited to sleep.

Every day I walk around with a reminder of Mamaw on my left ring finger. The significance is not lost on me. As I sit here sipping coffee and listening to the Mormon Tabernacle Choir flawlessly perform songs that wrap me comfortably in Christmas tradition, not one bit of this is lost on me.