I took ballet for 15 years. When I say I took ballet, I mean that I was in attendance at ballet classes once or twice a week for 15 years. The talented women who taught me would tell you I spent most of the time goofing off and singing karaoke to whichever ballad was playing at the time (Shoutout to Cheryl – I love you, lady!)

Dance classes were my first outlet. I spent ages 0-5 on the sideline of soccer games watching my older brothers. My first sentence was, apparently, “is it the fourth quarter yet?” I am not kidding. Ballet was the first thing that was mine. My mom signed me up because the doctor told her how tall I’d be immediately ruling out a life as a gymnast. Okay, that’s not the real reason… but it had something to do with me being tall and posture and… I don’t know. You’d have to ask my mom. Whatever the reason, I loved being there. I loved wearing the leotard and tights. I loved moving around to music. I loved that my best friend was in class right beside me. The only thing I hated was putting on all the make-up for dance recitals, but life’s all about the give and take… or that’s what my mom probably told me while she tried to line my eyes. That or “hold still, I’m almost done.”

For the first few years I was pretty serious about it. I wanted to be a dancer. I worked to learn all the steps and practiced routines in my bedroom. Then it changed. Sometime around middle school I realized dance classes were a great captive audience for me to entertain. I stopped taking anything seriously and started singing along to the songs we listened to during warm-ups. I made up new twists to our normal routines because they were funnier. I told jokes during class. For some reason my dance teachers never stopped me. I like to think we had a mutual understanding that I was never going to be a championship competitive dancer. I was just there for exercise and some good clean laughter.

Earlier this year one of my best friends (and the daughter of my high school dance teacher) got married. I was in her wedding. We spent part of the morning of her wedding day listening to songs from old dances (read: Total Eclipse Of The Heart on repeat). Just like in high school, one of my other best friends tried to remember some of the routine. She asked me for help and I laughed… hard. I barely knew the dances when I was performing them on stage. I don’t know how anyone keeps something that far gone in their mind. Except that I was able to perform my infamous high-drama karaoke version of “Tuuurrrn Around Briiiight Eyes – EVERY NOW AND THEN I FALLL APAAAARRT!!” So maybe some things do stick with a person.

Somewhere there are VHS tapes of my first recitals. They’re probably really cute. Little kids stumbling through choreography is precious and awkward. Somewhere else there are DVDs of my high school recitals. I’d be fine if those burned in a massive bonfire — all the copies. Those are not cute. The only time choosing entertainment over actual focus didn’t pay off was on stage, and that’s what’s on those recordings — still awkward, but no longer precious.

If you met me as an adult and asked me to tell you a few things about myself. I might describe my family. I might tell you what I do for a living. I might tell you that I like to run. I probably wouldn’t tell you that I took ballet for 15 years, because you might not believe me. Also because I’m still not sure it counts as “taking ballet” if you weren’t really paying attention most of the time. 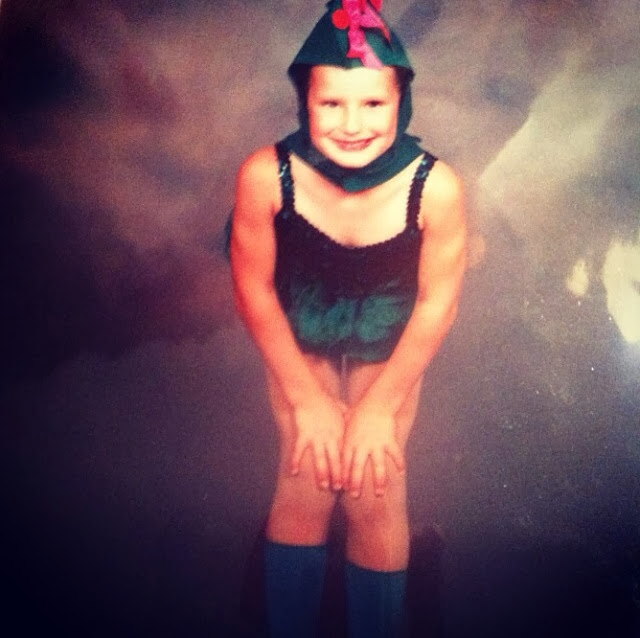 This costume was the best of all time. 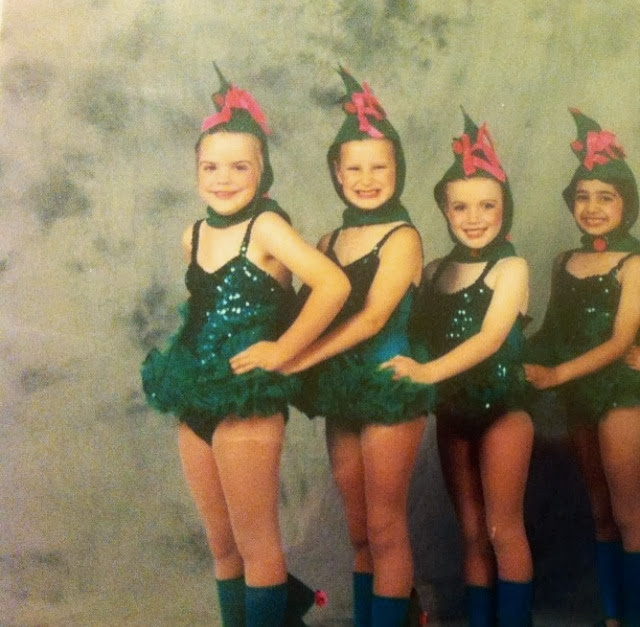 We were dinosaurs! I’m the second one. The first one was my best friend since birth.