Mamaw weighed around fifty pounds when Alzheimer’s was finally finished with her. That’s a fact I didn’t know until years later. I remember her being tiny. I remember that I could easily fit my six foot high school body next to hers on the hospital bed we’d moved into the house for her, but I didn’t realize she’d gotten that small. It makes sense, though. She was still able to laugh when I’d lay there and make really simple jokes I knew she’d understand, but her laughter was soft and weak. My mom knew her weight because she’d held her on the scale just a day or two before she died. Mamaw’s final days are a blur to me. I was a senior in high school. She’d been living with us for three years. Papaw died suddenly seven months before and I was still caught up in that. I spent most of my time trying to entertain her instead of focusing on the fact she was definitely leaving soon.

Last week one of my best friends asked me some questions about alzheimer’s. Her family is dealing with the beginning of a similar situation. It’s a brave thing to ask about, because everyone knows there are no positive answers. Someone you love is slowly going to forget who you are, then who they are, then how to even continue eating and breathing on their own. I did my best to answer her questions, but realized that I don’t remember very much about the process of the disease. I know it’s awful. I know Mamaw went backwards through stages of her life. Most of the time she lived with us she didn’t remember who I was, but she knew I was a familiar face. There were nights she woke up devastated at the loss of her son who died in 1969. In Papaw’s final months she had no idea he was her husband, but she could remember when he’d eaten cake earlier in the day and she’d call him out on it if he tried to say he’d done well on his diet.

I remember the things she did that were funny. She’d hide colored pieces of mail. If anything pigmented came in to the house with a stamp on it, she’d hide it in a couch cushion or down in the sides of her favorite chair. I remember she’d hide her false teeth sometimes. It wasn’t funny when she would get out of the house and try to walk down the street alone, but it was funny when she’d push her very tiny frame right up against mine and try to get past me to go out the door. She told us all the time that she was going home. I must’ve said “you live here” four thousand times in that last year.

I remember that I stayed home some nights to “babysit” her when my parents had to take care of other things. God, she would’ve hated knowing someone had to watch her like that – especially her teenage granddaughter, but I didn’t mind it. I sort of treasure those nights because at least for a few hours she knew I was someone to trust, even if she couldn’t remember my name.

I had a birthday party when I turned 18. A bunch of my friends came over. Mamaw was 11 days from death,  but we didn’t have any way to know the count. I remember almost nothing about that party, except that my friends who knew about Mamaw wanted to meet her. I took a parade of sugar-high teenagers into the bedroom that had been transformed into a hospital room to meet her. I climbed in her bed with her and put on a show in front of my friends. I told jokes. I told her she was too skinny and needed to “beef up”. Mamaw laughed. Mamaw smiled. That’s the last time I definitely remember her smile.

These are the things that went through my head when my friend asked me questions about it. I tried to give solid answers. I tried to reach deep into my brain for the real facts about the disease. The truth is, I don’t have clinical answers. I don’t know much about the medical explanations of how Mamaw’s brain essentially disappeared. I never bothered to learn much about the science behind it, because I was living it in real time.

What I remember is that she was able to laugh all the way through and that’s the best thing I can tell anyone who is facing that illness. It’s far more devastating for the people around the disease than for the person who has it. For my money, the best way to get through it is to remember a person with alzheimer’s can still laugh.. and it’s only fair, really. If you’re going to die not remembering anything about the people who love you, then you damned well better at least get to hold on to your sense of humor. 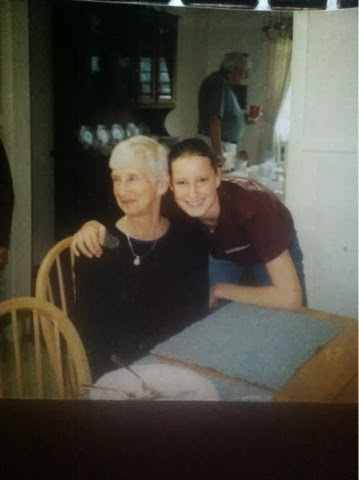