I could’ve slept for two more hours, at least. I don’t know what made me set a pre-dawn alarm on my day off. When I get in my mind that I want to do something, I do it. It’s a consequence of being the youngest child and incredibly stubborn, I suppose. Last night I wanted to see a sunrise, so the alarm was set. I woke up, put on some shoes, fed and walked the dog and headed to my nearest high school to watch the everyday miracle that starts in the East.

There’s a time between dawn and the actual sunrise when the sky is bright enough that you think you may have missed the pink and orange show. Everything looks like daylight, but the sun hasn’t actually reappeared yet. That’s what was happening when I reached the top of the stadium and found a spot to lean on the railing. I had my phone out, ready to snap a dozen photos to post into the internet abyss. Then, on instinct, I took one photo and put the phone away. A picture wouldn’t do any of it justice, and I’m more of a words person anyway. I vowed to not look at twitter or instagram until I’d seen what I came here to see. It disgusts me that this is even a bargain I have to make with myself, but I’m a product of the 21st century and that’s just how it goes.

For several minutes the clouds looked like dying embers. Their edges had that glow you see when you’ve been by the fire pit all night and you’re just waiting for it to cool down enough to be left alone. I watched as the glow spread across the entire top of a massive cloud that seemed like it might put up a Pacquiao-caliber fight against what I came here to see. I was getting impatient. That’s my nature. I knew what I wanted. I knew it wouldn’t look much different than it has in the past. I knew it could happen faster.

I looked down at two gatorade bottles that now held dip spit. Disgusted, I kicked them down the row of bleachers a bit and looked back up at the sky. I don’t know what about the discarded paraphernalia of southern teenage boys made me decide to go back to what I was doing, but I’m pretty sure I just needed to see something beautiful again to get the brown spit water image out of my head.

The sky was turning pink and purple at this point. I realized then that I’d been here before. (I also realized that I can’t just sit and stare at something without my mind wandering, but that’s a different story.) I’d been in this stadium at dawn. I was a teenager myself, maybe 16? I was waiting for my race to start. I sat, nervously, somewhere on those same bleachers staring into the woods trying to map out how difficult that course would be. I was in that same spot at the same time of day with a completely different purpose.

The rays began slicing through what seriously must have been one of the largest clouds I’ve ever seen. I felt the late September, early morning chill and pulled my hood on and my sleeves down over my hands. It was reaching that breaking point between the overnight cool and the sun’s first moment to reach through and warm the Earth. That may be my favorite moment of any day. I’ve always been a sunrise person. There’s something about the optimism of a sunrise. I think my insistence that sunrises are better also has something to do with being from the East Coast. The sunrise belongs to the East Coast.

The moment just before it finally happens is one of anticipation. I’m no stranger to anticipation. I, like most people, know that anticipation can often be one of the better parts of things. Anticipation before a big game, when opening a present on Christmas morning, in a loving moment with a significant other. Those few seconds just before the sun finally breaks through are the most optimistic of the entire day. It’s fleeting, but it comes every single day — the moment when you know exactly what is happening next, but you just can’t wait to see how it plays this time.

The sun joined my day, already in progress. I felt it’s warmth. I watched it rise a little higher. I took another photo or two. I packed up the sweatshirt and water I’d brought. I kicked the gatorade dip spit bottles a little further down the line and headed to the track for some sprints. I could’ve slept for at least a couple more hours this morning, but I’m glad I didn’t. 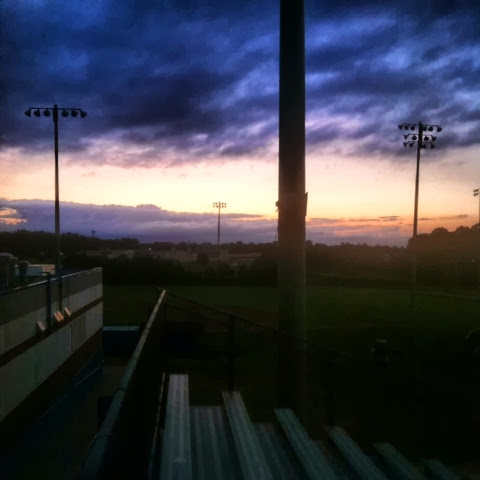